WE PURCHASED A RENAULT KOLEOS – OUR REVIEW

We needed a new car since our Honda CRV was involved in a car accident and was written off. The Honda CRV served us well for the past 10 years and we made many memories with it.

After some research and driving several cars, we decided to go with the Renault KOLEOS Formula Edition metallic colour (looks white but it’s actually metallic). It was within our budget and it has many features – we honestly think it’s a very underrated car and is good value for money. The Formula edition is a limited edition series and apparently there were only 400 manufactured for Australia. The Formula Edition has these additional add-ons for an extra $500 (total $36,990 drive away) :

As part of the package, you get 7 years Unlimited KM warranty, 4 years roadside assistance and 3 years limited services capped price. The limited-service covers around 3 services (1 per year at around 30,000km) The value of the service capped pricing is $349 per service. I’ve never had to claim any warranties in the past for the Honda CRV (was only 3 years I think) so I hope the process with the Renault is going to be easy. Fingers crossed.

We have been driving the car for 3 months and overall we are quite impressed with the Renault KOLEOS. During this period we found a few things we really liked with the car and some things we think could be improved or didn’t like (note some was just personal preferences and it can be very subjective) but a review wouldn’t be called a review if we didn’t include these personal opinions.

The back seats cannot be reclined and are fixed at a particular angle. I initially thought they could not be reclined due to the boot cover blocking it but that’s not the case. My daughter complained that on long trips she use to be able to recline the back seats on the Honda CRV which was more comfortable for her.

I am an entrepreneur based in Sydney Australia. I was born in Vietnam, grew up in Italy and currently residing in Australia. I started my first business venture Advertise Me from a random idea and have never looked back since. My passion is in the digital space, affiliate marketing, fitness and I launched several digital products. You will find these on the portfolio page.

I’ve decided to change from a Vegetarian to a Vegan diet and started a website called Veggie Meals.

I started this blog so I could leave a digital footprint of my random thoughts, ideas and life in general.

Affiliate Compensated: there are some articles with links to products or services that I may receive a commission.

Other articles you may find interesting 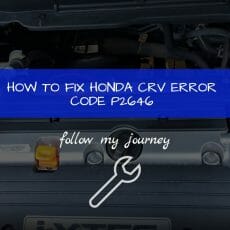 Panic strikes whenever you see the engine light flash on the

Let me start off by saying - always compare prices before ha